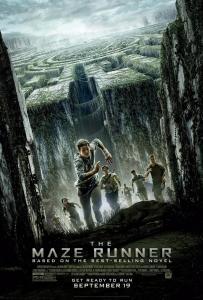 Perhaps the most unsurprising aspect of The Maze Runner – the latest member of the ever-growing club of Young Adult dystopian sci-fi – is that it is the first part in a trilogy, tasked with introducing us to its bleak world and investing us in its characters for the sequels that will inevitably be greenlit. By its very nature it must include set-up, but should it be allowed to get away with being entirely that? All preamble and no pay-off? Should it rather be self-contained, able to stand apart on its own without the help of its future episodic brothers? In a mess of absent exposition and unanswered questions, the films response is ironically very clear.

We are elevated into the Glade – a luscious forest and field area – along with our hero Thomas (Dylan O’Brien) and a healthy dose of amnesia. In this area we meet a group of teenage boys, all of whom have entered in a similar way to Thomas, now eking out an existence in a well established mini-society. Questions abound like sparks but it’s here where the film shows its odd approach to pacing. For a community so rooted in co-operation, the boys are remarkably reticent about explaining things to their new compatriot, sometimes even refusing to answer queries like it’s an insult to even be asked by an amnesiac newbie. Clearly some exposition is needed, but it’s spread out thinly along the runtime that all conversations become laden with it, never allowing time for the characters to develop or the viewer to care about them.

And it’s a shame that it’s all exposition when there’s so much talent in the young cast list. On the whole their performances are good but seem to be held back by weak scripting. Aml Ameen gives a sage performance as the longest-serving Glader and his careworn Alby is perhaps the most compelling. Will Poulter plays the closest to an antagonist, zealous to protect and restore the status quo after Thomas disturbs it, but his motives are flimsy which never gives his stay-at-home attitude any weight. Likewise Thomas Brodie-Sangster and Blake Cooper are solid but sadly one-dimensional. The greatest waste is Kaya Scodelario, who appears late in the game as a connection to Thomas’ previous life but criminally nothing more. She’s likely here to foreshadow a greater role in sequels but comes off as the token female, given very little to do at all. The less said about the bland Dylan O’Brien the better, his clichéd amnesia robbing him of almost all interest.

Whilst little care has been given to its characters, the excellence of The Mazer Runner lies in its production design. The eponymous maze is brilliantly imposing, so gargantuan that it literally casts a large shadow over our protagonists. The maze is also old but of unknown age, its cracks and overgrown areas lending it a monolithic quality as if it has stood for centuries. Its constant presence lends the world a wonderful tactility and entices you to ponder on the nature of the world beyond the maze, and just who or what might be in charge of this diabolical lab-rat stunt. This is clearly the direction The Maze Runner is going in, namely the next instalment territory, but it does so with such determination that it completely forgets to have a satisfying ending. It completely forgets to be its own film. It’s perfectly fine to have ambiguity in a story, but when your finale feels entirely like the introduction to the sequel, and there is no ending, you’re doing something wrong. The Hunger Games does it right, so why can’t you?

I’ve got high hopes for the The Maze Runner: Part Deux, where I have no doubt things will start to make sense, but I rather wish someone had just given me the heavily edited highlights from part one.