Time for some nerdy stuff. Well, nerd-lite if you will, these are just some musings.

Since the dawn of the 21st century, film and cinema have seen numerous advances in technology; from the ongoing digital revolution to blu-ray discs. New formats for viewing films have also emerged so that nowadays we have more options to choose from when embarking on a journey into the cinematic world at our local multiplex. A trio of formats has emerged, each offering a marked difference compared to a standard viewing format. IMAX, 3D, and HFR (and various combinations of them) are available across the country with only the latter being a relatively new addition, and only in select locations. So what are they? And what do they bring to the film-watching experience? Perhaps more crucially, are they any better than good old 2D, in which we have been viewing movies for many many years?

Let’s start with IMAX. The term itself is an acronym for Image Maximum and describes the greater size and resolution of the film used in the specialist IMAX cameras. IMAX films were initially used as exhibitions for museums and adventure-parks, but increasingly the format is being offered as a way to see your average blockbuster. This trend is often a post-production conversion of the film into the IMAX format, but in some cases does seem to offer the enhanced quality obtained from filming directly into the format. To date, I have seen two films that have been upgraded to IMAX; Avengers Assemble and Gravity. While the former offered little improvement over its 2D cousin, the latter was lent a great sense of immersion thanks to the IMAX format. As mentioned in my review, I saw Gravity on the largest IMAX screen in the country and the experience was well worth the few extra bob that I had to fork out for it. Having a screen that completely fills your field of view whilst still looking as sharp as ever has a knack for drawing you in – it almost makes the film inescapable. The superior IMAX sound then adds the icing on the cake as it engulfs your senses, and in this case, pulls you out to the edge of space, right into Sandy Bullock’s helmet.

It is somewhat of a rarity but there are some feature films that have been partially shot using IMAX cameras, including The Dark Knight, The Dark Knight Rises, Mission: Impossible – Ghost Protocol, and Star Trek Into Darkness. Out of these I have only seen The Dark Knight Rises in an IMAX screening and the transition from normal scenes to IMAX were hardly noticeable, but…watch the blu-ray at home and the appearance of black bars is pretty jarring. I’d love to see a film entirely shot in IMAX but that seems unlikely due to the cumbersome nature of the IMAX cameras, although saying that, Christopher Nolan has reportedly used more IMAX than ever before in his latest project; Interstellar. 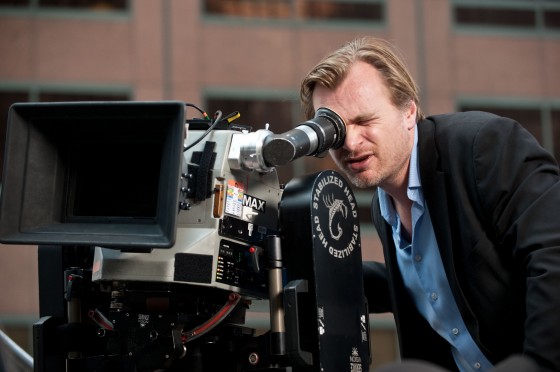 Christopher Nolan getting the IMAX view on set.

Moving on to the third dimension. Its resurgence in recent years is not the first attempt at establishing itself as a permanent choice at the cinema. I won’t go into the history too much but 3D has actually been around longer than most people think with confirmed experiments into stereoscopy as early as the 1920’s. In the last craze before the current one, around the 70s and 80s, 3D popped up mainly attached to horror features and those of an even less savoury nature. It had its day but the technology wasn’t great and it fizzled out. Now thanks to James Cameron and a few others, 3D has made another spirited assault on the box office, ironically asking us to find new depths in our wallets for some extra depth on the screen.

I’ve seen my fair share of 3D screenings; Avatar, Alice in Wonderland, Avengers Assemble, The Hobbit, Amazing Spider-man 2 to name a few, and quite honestly I’m not a fan but my opinion has wavered slightly on my past few outings. It can’t be denied that Avatar was a breakthrough and the added depth was quite impressive. It couldn’t save Avatar from mediocrity but audiences flocked to see it, even going again to see the special edition – how 9 more minutes of Pandora justifies another ticket I’ll never understand! the 3D craze has an ugly side though, and around the time of Avatar, studios were keen to get in on the act and started to retrofit films shot in 2D into 3D. This made for some poor viewing experiences and at worst induced headaches in audiences. It also appeared as nothing more than a gimmick to increase profits based on more expensive tickets – there’s only so many times an object can be thrown out of the screen towards you before it gets old. 3D tickets sales have seen a decline and there have been complaints from audiences, especially parents who have to amass a small fortune in order to take their children to see the latest Pixar or Dreamworks offering. There’s also the issue of 3D screenings being considerably darker light-wise than regular 2D and the need for those hipster-esque glasses. Many believe 3D won’t be around for long, but it’s still here today and at the end of every trailer I see the options for 3D presentation and I’m not so sure we’ll see its demise this time…

The question I often ask myself is, does 3D add anything beyond the obvious, to a film? I’d have to answer that for the most part it doesn’t. But the problem is not with the format, but its use.

Almost every blockbuster film marketed to the widest audience will have 3D as a viewing option. It’s always there, sometimes even against the wishes of the director. It’s added on to drive up ticket prices, slapped on without a care – overused. The only way I can see 3D working is not as a gimmick, but as a cinematography tool, used in the same way as lighting and framing to generate immersion. A great example of this is on display in Gravity. Space is an inky black vastness where depth is indiscernible, but with 3D, Gravity was able to give a sense of space and position for the people and objects it focused on. I have yet to see the 2D version of Gravity so I might be about to eat my words but I can’t see 3D sticking around any other way.

But there is one more twist in the tale; the appearance of HFR 3D. HFR stands for High Frame Rate and is where the film is shot and projected at 48 frames per second as opposed the to the usual cinematic 24 frames. The only films, along with film-maker, to embrace this genuinely new format has been Peter Jackson with The Hobbit trilogy. These films have been shot in 3D at a higher frame rate with the express purpose that they be viewed in that way. When the footage premièred it was met with a wall of disapproval with many likening it to an HD television broadcast – “BBC live from Middle Earth”.

Peter Jackson with one of the many Red Epic cameras used to film The Hobbit trilogy.

I’ve made a point to see both Hobbit films released so far in HFR 3D, and it’s left me sitting on the fence. The first moments viewing an HFR film are very strange indeed and take some getting used to. Everything on screen seems to be moving at a much faster pace – the opening shots of Bilbo walking round Bag End looked like a scene from The Benny Hill Show! Thanks in part to the length of these Middle Earth adventures, you should be adjusted before the first major action sequences arrive which is where HFR produces its trump card. The benefit of those added frames is that action becomes buttery smooth and for the first I could see every swing of the sword and every flailing limb. It’s a marked difference. As to whether HFR makes 3D more bearable? I can’t say, but perhaps the complete lack of new HFR films on the horizon speaks for itself. It’s an interesting format and a real game-changer but many see a move away from 24 fps as cinema turning its back on its own heritage – Cinema is almost by definition, at 24 frames.

Overall, pure cinema and film-making is unlikely to be drastically changed by these formats. IMAX gives a boost in visual and audio fidelity but at a cost, 3D is more often a gimmick but has the potential to be used as a tool, and HFR is likely to go the way of the Dodo very soon. Many of the greatest films had none of these extras and are still moving people today – cinema simply needs a camera for filming and a screen for projection, and I think it’ll retain that essence for many years to come.

Besides, 2D tickets are still cheaper than 3D ones!