There was a time when Judd Apatow was not a well-known comedy film producer, and the likes of Will Ferrell, Steve Carell, and Paul Rudd were not as famous as they are today, especially here across the pond. This was a time before the release of Anchorman: The Legend of Ron Burgundy (to give it its full title). After said release, the film received middling reviews and did well at the box office, but it has only been in the following years that it has graduated to the rank of cult comedy thanks in part to DVD sales and word-of-mouth, particularly in this country, but what makes it cult material?

Anchorman is the story of Ron Burgundy (Will Ferrell), an immensely popular San Diego newscaster, in the TV news heyday of the 1970s. His world and the world of his all-male news team is turned upside down when a female newscaster in the shape of Veronica Corningstone (Christina Applegate) joins the channel. Comedy antics ensue, all culminating in the coverage of the birth of a panda – “Panda Watch!”. While the film could be considered a collection of comedy sketches with recurring characters, the plot knits these together convincingly, even allowing room for the more absurd moments to flourish.

Unlike our titular hero, I cannot say that the story is “compelling and rich” (one of my favourite lines), but that is hardly the point. Comedies of this ilk rely on the interplay between their various oddball characters, who punctuate every well-chosen scene with their humuorous exchanges. Ron Burgundy himself is a man very much grounded in his time; sexist, vain, and arrogant, but he can really turn a phrase. His dialogue is peppered with line after line of bizarre exclamations and juvenile wisdom, each one played for laughs to increase their quotability. I am not entirely sure how much of the finished film is improv and how much is the careful writing of Ferrell and director Adam McKay, because you get the feeling that the actors (a large amount of which are talented comedy performers) were given freedom to just go with it. Regardless of the method, the result is some sharp comedy. 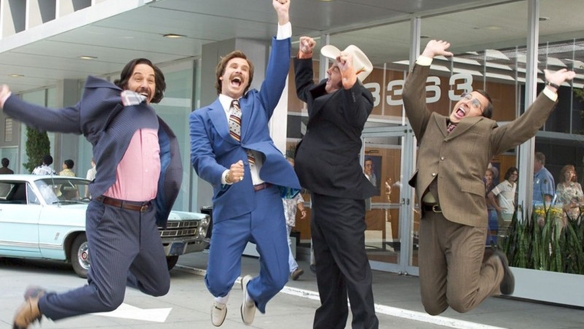 From his enigmatic intro at the very start of the film, it’s clear that Burgundy carries the film and he might very well be Ferrell’s best comedy creation. He perfectly inhabits the role in every way and is a commanding presence throughout, perhaps due to his glorious Tom Selleck facial hair. Someone who deserves a large amount of the plaudits is Christina Applegate, whose performance as the independent and ambitious Veronica is easily a match for Ferrell’s cocky Burgundy. They work well as a comedy duo, and share one of the best scenes where they insult each other while the news credits roll, unbeknownst to the viewing population. Hilarious stuff. The news team, which includes Paul Rudd, Steve Carell, and David Koechner, (Brian, Brick, and Champ respectively) are all excellent characters and display another ingredient for cult film success – strangely endearing characters, even if they are closer to caricatures.

It’s these traits that make Anchorman an entertaining comedy film, acquiring new devotees over the years. I am one of them, and while not ready to dress up in a garish suit and attend a fan-festival, I could easily fill up quite a bit of space on here going through some of my favourite gags/scenes; the news brawl, the burrito incident, ‘Afternoon Delight’, pick-up attempts, practically everything with Baxter, “Bear Fight!”, and so on and so forth. It’s silly, quote-ready, and more importantly, very funny. Once it’s tickled your funny bone, you’ll be hard pressed not to quote along with the rest of us.

This review goes out to Paul, who has bugged me on many occasions to review this film, I hope the delay hasn’t left you in a glass case of emotion. If you have any suggestions of films for me to write about, I’d love to hear them. You can email (kyleonfilm@gmail.com), tweet, or facebook me and I’ll endeavour to reply as soon as I can.

1 thought on “The Cult of Burgundy – Anchorman: The Legend of Ron Burgundy (2004) Review”