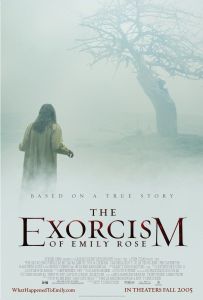 I went into this film with expectations. The trailer boasts an all-out horror about demonic possession of a teenage girl, and it looks pretty darn scary. I expected the nerve-shredding tension and suffocating atmosphere that wouldn’t allow me to sit comfortably. What you get is not quite that. The Exorcism of Emily Rose is an interesting film that seeks to present the evidence of faith versus science, in the context of a chilling tale, leaving the conclusions up to the viewers themselves.

The story, which is based on the real life account of the supposed possession of Annaliese Michel, could be better described as a courtroom drama with horror elements. Emily Rose (Jennifer Carpenter) has died and the parish priest, Father Richard Moore (Tom Wilkinson) is accused of being responsible for her death through neglect and failed exorcism. In court he is represented by self-proclaimed agnostic Erin Bruner (Laura Linney), who takes on the case in order to climb the legal ladder. Her opponent for the prosecution is Ethan Thomas (Campbell Scott), who is interestingly enough, a devout Catholic. The majority of the film is set in the courtroom where evidence is presented and witnesses come forward to recount what happened to Emily Rose during her life after she went to college and allegedly became possessed by demonic spirits. These are told through flashbacks that are without doubt, the scariest parts of the film.

The sequences of possession are quite chilling with their combination of screeching sounds and dark tone; everything seems to be infected by the otherworldy forces at work. Places that would seem normal are rendered horribly bleak and almost hellish under the influence of the demons inhabiting this young girl – even when she flees into a church she is still not safe. Jennifer Carpenter gives an incredible physical performance, the inward torture of possession shown alarmingly well through her contortions and amazing facial expressions (apparently the production saved money on special effects). The power of her lungs is also on display, resulting in ear-shredding screams that tear through the scenes. I imagine this was quite an assault when viewed in the cinema. I wasn’t particularly scared during these moments but they serve well enough to put creepy flesh on the bones of the case.

What drives the story is the questions posed and well-measured acting, especially from Linney, as her character examines her own views and comes to believe in the sincere Wilkinson, even if she does not share his beliefs. The director wisely does not splash a blatant opinion over the final outcome, urging the audience to examine their own views and beliefs – where do science and faith meet? Do they meet at all? How do we approach and explain strange events like these? In the end, proceedings in the court are sometimes ponderous and explanation is a bit simplistic and hokey, but the intrigue in the case means The Exorcism of Emily Rose is an interesting drama with an uneasy sense of horror.